Come to the (captioned) drive-in movies with Lipreading Mom!

Will you come along on an exciting trip with Lipreading Mom in a history-making event? Tonight, I head to the first-ever open captioned drive-in movie shown in the good ol’ town of Kansas City. The featured film: Monsters University. And I won’t be alone—dozens of deaf and hard of hearing residents and their families will have their buckets of popcorn for this once-in-a-lifetime show.

If you can’t make the trip to Kansas City, don’t fret. I will be giving away prizes to the first *five people* who answer this question for me in the Comments section below: What was the first captioned movie you ever saw and where?

Open captioned movies are nothing new here in Kansas city. The first one shown was way back in 1996 when local deaf and hearing loss community activists helped bring an open captioned showing of Mr. Holland’s Opus (starring Richard Dreyfuss) to the big indoor movie screen. But an outdoor captioned movie? That’s just unheard of in these parts of the U.S.

From what I understand, this is the first open captioned drive-in movie ever shown in the United States. How did this movie event come about, and how long has the planning been in the works?

Actually, we found that this is not the first open captioned drive-in movie ever shown in the US. There is a theater that does this in Minetto, New York—Midway Drive-In. However, this is the first event of its kind in Kansas City. John Shipp (who works with Boulevard Drive-In) has been working with local drive-ins for several years – decades—and he can’t recall any other time a drive-in movie was offered with open captions. Needless to say, Boulevard Drive In, Cinema KC, and TWP are so excited to make history in KC with this event.

This movie event came about when I reached out to Boulevard Drive-In. Boulevard Drive-In and the Wes Neal Family (drive-in owner and operator) had made a nice in-kind donation for a raffle prize for The Whole Person’s (TWP) Expressions Art Show Event back in May. I called John Shipp to thank him. During our conversation I asked if they ever offered captioned movies. TWP is always looking for new ways to engage with the community while increasing awareness about our work and accessibility issues. John said no, they had never offered a captioned movie at the drive-in because they had never been asked to. But he thought it was a great idea and was eager to move forward. He was so excited about it that he called me back 10 minutes after our original conversation to talk about more details! So we began making arrangements with John and with Jerry Rapp, who works with Cinema KC. Planning began in April after my initial conversation with John.

No other theaters had been contacted. We are hoping that captioned drive-in movies become a regular thing for Kansas City. I think that if our event goes well (and we are expecting it will!), then Boulevard Drive-In will be willing to offer more captioned movies. We hope that other drive-in theaters take note of what Boulevard Drive-In is doing and follow suit, offering captioned movies on their screens, too.

You mentioned deaf pantomime and community activist JJ Jones was involved in planning the captioned movie. How did it help having such a strong captioning advocate on board at The Whole Person when contacting Boulevard Drive-In? 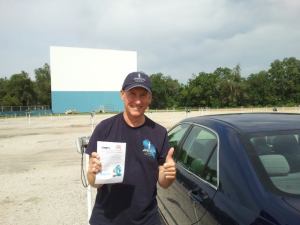 Was anyone else involved in making the captioned drive-in movie happen and, if so, whom?

In addition to Boulevard Drive-In, we are working with Cinema KC on the event – they are helping with promotion and logistics. Cinema KC is a local nonprofit organization whose mission is to cultivate diversity, education and outreach within the art and film community.

TWP Staff, including JJ Jones, CEO David Robinson, and TWP’s Marketing Team are working hard to promote the film in the Deaf community and to all of our supporters.

In our planning discussions it was suggested that we also offer descriptive narration at the July 11th event so that the movie is also accessible to people who are blind or have low vision. So our Public Policy Coordinator Sheila Styron and I are doing some research on how to offer descriptive narration at a drive-in. We know that it can be done in regular movie theaters using a product called DVS Theatrical- the descriptive narration is fed via infrared or FM transmitter to a small portable receiver, enabling blind and visually impaired moviegoers to hear the descriptions on headsets from any seat in the theater.

Boulevard Drive-In is willing to offer descriptive narration, but so far in our conversations with industry experts, we have not found any other drive-ins in the U.S. that are offering descriptive narration and we are not certain that the technology exists at this time for drive-in theaters. So we really will be making history if we can pull that off, too!

Readers—What Was the First Captioned Movie You Ever Saw and Where? Lipreading Mom will give away prizes to the first *five people* who answer this question in the Comments section below! 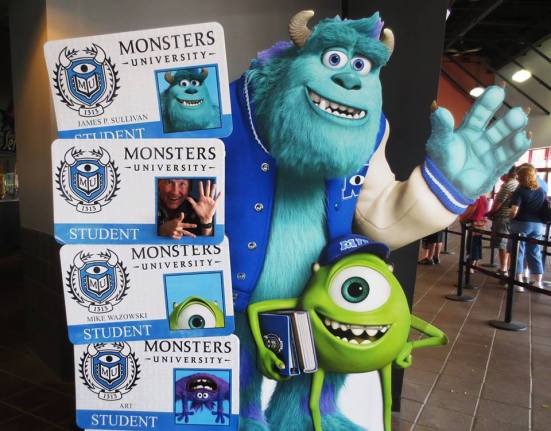