What’s black, worn over the eyes, and communicates in fluorescent green text?

Why, captioning glasses, of course.

My latest adventure at the cinemaplex featured the latest captioning equipment on the market: Sony Entertainment Access Glasses. Yesterday my friend, Terri, and I ventured to a Regal movie theater to wear one of only 10 sets of these $2,000 glasses in the Kansas City area. Was it worth the drive? I’ll get back to that in a minute. But first, check out these super-duper glasses in their 3-D splendor… 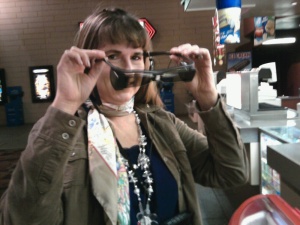 Now you see my friend’s eyes…

…Now you don’t! Check out those fashionable captioning ‘spy’ glasses. 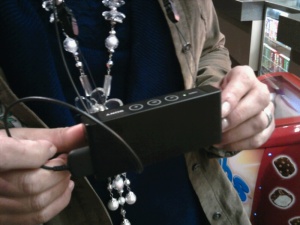 Captioning receiver box rests in your lap during the movie. Popcorn, anyone?

How do captions fit into these itty-bitty glasses?

Here is what Sony says about the shades, verbatim: “When wearing this stylish and lightweight see-through eyewear, users can see closed caption text seemingly superimposed onto the movie picture that they’re watching on screen—t’s a natural subtitle movie experience.”

But that’s not all.

“In addition,” Sony declares, “as the captioning glasses’ receiver box is equipped with an audio assist function, this solution is useful not only for people with hearing difficulties but also for people with visual impairments—both can enjoy movies far more than ever before.”

Too good to be true? Too confusing?

Check out this visual demonstration, complements of Sony (photo below). 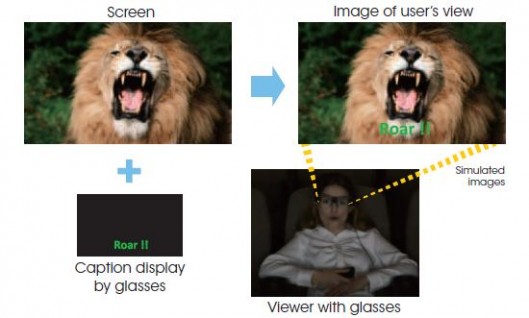 Yesterday’s movie choice was the 3-D saga “Life of Pi,” directed by Ang Lee. It involves an adolescent Indian boy, a Bengal tiger, a small boat, and lots of peril. How would I ever understand a heavy-on-the-accents movie or talking animals without captions?

The glasses rested on the bridge of my nose for the opening credits. The lenses were outfitted with a special 3-D film so that I could watch Mr. Tiger in the opening montage leap off the screen fangs first. Then the actors began talking, and I searched everywhere for my captions. After sliding the glasses up and down my nose, I finally located the words at the bottom of my spectacles. They were minty green and only visible at the blackened bottom of the screen.

No problem, right? I’d just sit with my neck craned to an awkward angle in order to read the words dancing above my nose.

Then, ferocious Mr. Tiger jumped out of the shadows again and nearly scared the glasses right off my face. That’s when the words disappeared yet again. POOF! I slid the glasses up and down my nose until I caught up with those pesky green letters.

I spent the next two hours alternating between sheer wonder at my high-tech 3-D captioning glasses…and the seated position at which to best read those captions.

All in all, my movie experience was state-of-the-art, Oscar-caliber exciting. Until my nose flinched and I momentarily lost sight of the captions.

Would I use Sony Entertainment Access Glasses again? If the movie was something as visually and intellectually stimulating as “Life of Pi”—yes. Any subpar captioned flick would have been too much for my eyes, nose, and neck to endure. The movie has to be Oscar-worthy in order for me to use these glasses again.

I want to publicly thank Sony and Regal theaters for making my movie experience so memorable and for trying to accomodate my captioning needs. Imperfect technology aside, I appreciate the ability to see and understand a first-run movie.

In the future, I think producing films with open captions (captioning printed directly on the movie film) is the way to go. But that’s for another blog post.

17 thoughts on “Are Captioning Glasses Really the Wave of the Future?”